Coastline a refuge for threatened animals

Coastal dunes are proving to be an important refuge for threatened native mammals suffering from habitat fragmentation and degradation, predation by introduced species, and potential rainfall reductions associated with climate change.

Four decades of research and monitoring in Victoria’s eastern Otway Ranges reveals ongoing declines in the number of small native mammals, including some threatened species.

Researchers used cameras and live-trapping to assess 40 sites in Victoria’s Otway Ranges from 2013 to 2016, which revealed few or no native species present. Earlier research, conducted between 1975 and 2007, found four to nine native mammal species at the sites. The researchers found that the numbers of most species have declined significantly, while numbers of two threatened species, the marsupial swamp antechinus, Antechinus minimus and the native rodent the New Holland mouse, Pseudomys novaehollandiae, have plummeted.

‘Conservation work is being hampered by lack of information. We need ongoing monitoring. With it, we might have picked up the decline in the Otway Ranges before it became so dramatic,’ said Dr Barbara Wilson, an Associate Professor in Ecology at Deakin University, Victoria, who has led the research.

She says human help is required to ensure the remaining species can adapt to climate change. ‘Management actions that we need now include prevention of further fragmentation and degradation to habitats, appropriate controlled burning to protect key habitats, and control of predators, particularly foxes and feral cats.

Effective monitoring will show us whether these management actions are successful and allow us to refine our approach,’ said Dr Wilson.

‘We are particularly interested in the swamp antechinus and the New Holland mouse because they have been listed as vulnerable under the federal Environment Protection and Biodiversity Conservation Act.’

‘We found native mammal populations declining in woodland, forests and estuaries. However, at coastal dune sites there were higher numbers, showing that these habitats can provide important refugia for mammals.’

Dr Wilson’s research follows a study by her Deakin University colleagues that shows Australian native animals could be under threat of extinction from climate change, with our small mammal populations suffering the ravages of long-term low rainfall and intense wildfires.

Are there threatened species or protected coastal areas in your region?
What adaptation options have been considered in your region to help species adapt? 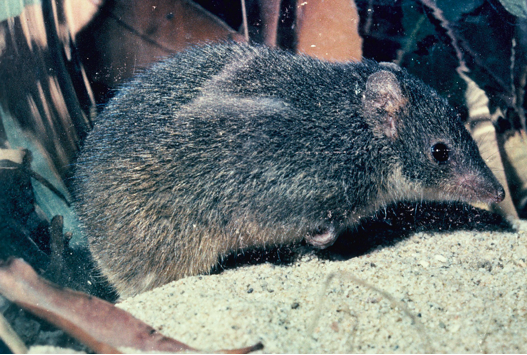 The marsupial swamp antechinus, Antechinus minimus, is one of a number of threatened Australian small mammals. (Credit: Barbara Wilson)
30 June 2017
Save