Tropical cyclones and East Coast Lows are projected to become less frequent as a result of climate change but those tropical cyclones that do occur are expected to be more intense, and may track further south.

The most important damaging windstorms that affect Australia are tropical cyclones and East Coast Lows.

What is a tropical cyclone?

Tropical cyclones are intense low-pressure storms that develop over warm ocean waters (temperatures greater than 26.5°C) with sustained gale force winds of at least 63 km/h. Their intensity is described in terms of categories ranging from 1 (weakest) to 5 (strongest), related to the maximum mean wind speed (Table 1).

The Bureau of Meteorology has developed a video to help explain the different tropical cyclone categories: http://www.bom.gov.au/cyclone/about/intensity.shtml (accessed 1 April 2016).

Where and when do tropical cyclones occur?

Australia is one of the most cyclone-prone areas of the world, especially the northern coastal region of Western Australia. Tropical cyclones occur mainly between November and April over the northern half of the country, north of Exmouth in the west, and north of Rockhampton in the east. Generally they last for several days, following a track that typically has a west to east component. Once their track passes over land, and they are removed from their source of water and energy, they die out.

For the last two decades, Australia has experienced 11 tropical cyclones on average each year (Dowdy 2014), of which 4 have crossed the coast.  Over time, the total number of cyclones appears to have decreased to the mid-1980s and since then has remained nearly stable (Figure 2). There is no long term trend in the number of severe tropical cyclones (with minimum central pressure less than 970 hPa).

El Niño events, when the east-west atmospheric circulation in the equatorial Pacific is weak, and La Niña years, when the east-west circulation is strong, influence the number of tropical cyclones. Changes in wind patterns and water temperatures result in fewer tropical cyclones crossing the coast during El Niño years, and more during La Niña years. 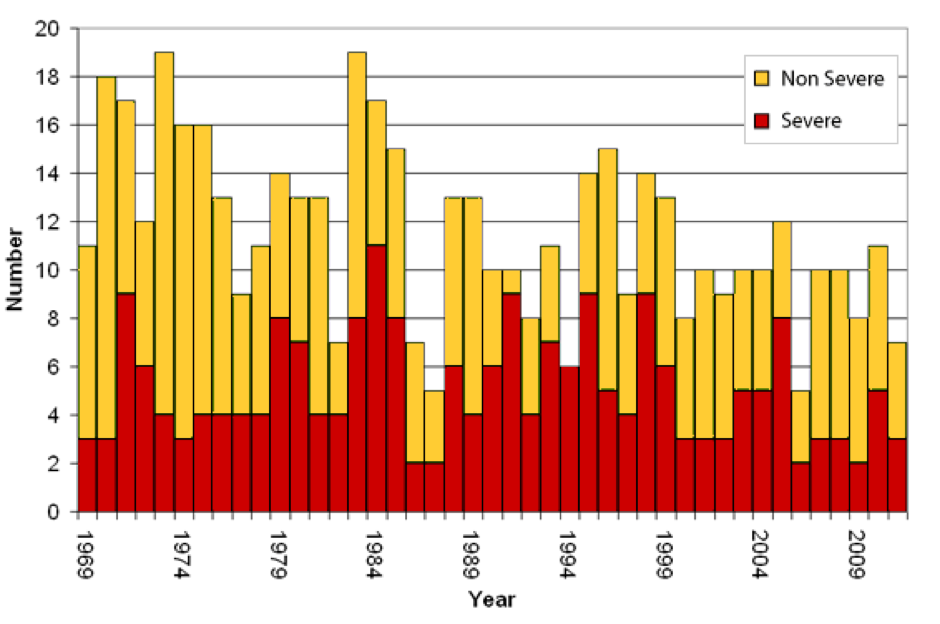 What about extratropical storms?

Severe storms can occur anywhere in Australia and do so more frequently than any other major natural hazard. They can cause great impacts as a result of the destructive winds, heavy rainfall and large hail that they can produce.

Of particular interest are the East Coast Lows (ECLs) that affect the eastern coast of Australia (southern Queensland, New South Wales and eastern Victoria). These low-pressure systems have much shorter lifetimes than tropical cyclones, typically one to two days, but can occur any time of the year, being more common between May and August. ECLs can develop and intensify rapidly overnight making them dangerous and very difficult to predict. This was the case with the Pasha Bulker storm (2007); a series of five ECLs that impacted the coasts of Newcastle during June 2007 and resulted in wind damage and widespread flooding, coastal erosion, the grounding of the Pasha Bulker (a 40,000 tonne bulk carrier ship) on Nobbys Beach, and the loss of nine lives.  ECLs can cause large amounts of rainfall and make an important contribution to water resources.

What will be the effects of climate change on windstorms?

Projections also indicate that the frequency of ECLs may also decrease over the coming century.

What are the risks associated with tropical cyclones and East Coast Lows?

Severe winds: Wind gusts near the centre of tropical cyclones can exceed 180 km/h.  ECLs generally have lower wind speeds but a gust of 165 km/h was recorded at Newcastle in 1974 during a storm that sank the bulk carrier named Sygna. Such violent winds can cause extensive property damage and turn airborne debris into potentially lethal missiles.

Heavy rainfall: Some of Australia's heaviest rainfalls have occurred in association with tropical cyclones and East Coast Lows. The maximum rainfall recorded during a Western Australian cyclone was 927 mm in 36 hours at Whim Creek in 1898 (BoM 2016).  Rain can lead to flooding and landslides. Events where wind damages the structure and allows rain to penetrate can result in severe property and contents damage to houses. Flooding can affect vast areas, inundating land, isolating communities and destroying infrastructure.

Storm surge + high tide: Storm surge is a sudden rise of water (about two to five metres higher than the normal tide level) caused by onshore winds and atmospheric pressure changes in the ocean’s surface. It can extend many tens of kilometres from the storm centre and has the potential to cause extensive coastal inundation, as well as damage to port structures and ships in harbour. If the surge occurs at the same time as a high tide then the area inundated can be extensive, particularly along low-lying coastlines. High waves can also exacerbate flooding.  These events are expected to become more damaging and extensive as a result of rising sea levels (see Global climate change for more information).

What are the impacts of windstorms?

Australian communities have learned lessons from windstorms events, and there is evidence of successful adaptation. For example, the devastating impacts of cyclone Tracy (1974) led to modifications to the building codes, and development of world-leading, wind-resistant design and construction practices in Australia (Mason and Haynes 2010). However, indications that tropical cyclones may become more intense in future, and track further south, suggest a need for further adaptations.

Australia has extensive experience in managing emergencies.  Some critical areas in handling an emergency include the following areas.

Each state and territory runs its own emergency management agency, all with different approaches to coordination and management. What is clear for all, however, is that emergency services cannot reach all of the people all of the time.  Therefore it is important to build preparedness and resilience at the community and individual level.