Although unlikely, it is possible that rates of climate change and sea-level rise will exceed likely estimates. This low probability but high-consequence risk needs to be borne in mind by coastal managers seeking to adapt to climate change.

The Intergovernmental Panel on Climate Change (IPCC) in its assessments provides estimates of future climate change and sea-level rise that it labels as ‘likely’. For example, the IPCC Fifth Assessment tells us that, by 2081-2100, sea level is likely to have risen by 45-82 cm and global temperature by 2.6-4.8oC for a high greenhouse gas-emissions future (our current pathway).  For a low emissions scenario, the equivalent numbers are 26-55 cm for sea-level rise, and 0.3oC-1.7oC for temperature (IPCC 2013). ‘Likely’, in IPCC parlance, means that there is 66% confidence in these estimates.

Most of the information and guidance in CoastAdapt is based on such average or likely estimates.  However, there is a chance that what actually happens lies outside the likely range.  Statistically, there is a 17% chance that the changes will be above the likely range. Or, it may be because the models on which these estimates are based do not capture all the processes at work in the Earth-atmosphere-ocean system.  For example, the sea-level rise estimates in the IPCC Fifth Assessment do not fully take account of the possibility that land-based ice sheets, such as the Greenland ice-sheet, may undergo rapid melting due to dynamical effects.

Here we consider the possibility that climate change may produce warming and sea-level rise that is greater than the likely estimate of the IPCC.  In risk terms, these are low probability but high-consequence events that, because of their potentially devastating impacts, cannot be ignored.  Coastal managers charged with making adaptation decisions will plan for the likely outcome, but bear in mind the possibility that what eventually happens may be more severe – that abrupt climate change may occur.

Abrupt and unexpected climate change, leading to warming and sea-level rise beyond the likely predicted ranges, has a number of possible causes.  Three causes that are frequently discussed are:

Other potential causes of abrupt climate change include the Arctic becoming ice-free even in winter, the Amazon rainforest dying off and the total disappearance of permanent snow and ice cover on the Tibetan Plateau.  With the exception of the collapse of the thermohaline circulation, they have the potential to impact severely on the rates of global temperature increase and/or sea-level rise, causing them to increase more rapidly than rates regarded as likely by the IPCC. 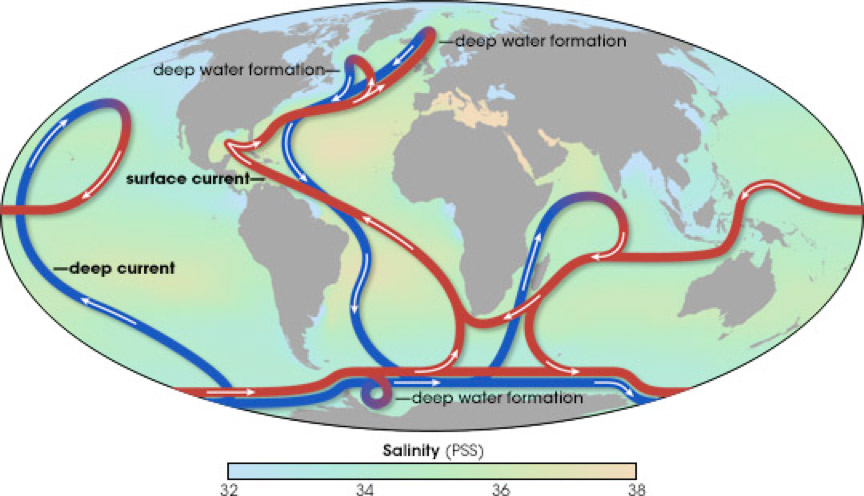 Figure 1: The large-scale circulation of the oceans, known as the thermohaline circulation. Source: Riebeek 2006 © NASA.

Article in The Conversation, December 2015 by Sybren Drijfhout “What climate ‘tipping points’ are – and how they could suddenly change our planet”: http://theconversation.com/what-climate-tipping-points-are-and-how-they-could-suddenly-change-our-planet-49405 (accessed 9 May 2016).