Importance of a regional perspective in coastal management

Coastal landforms have evolved through the action of dynamic oceanic and atmospheric processes, some of them at regional scales, on the coastal geology. Around Australia, there are a number of major longshore sediment transportation systems and areas of sand accumulation. Around the southern half of the continent these are driven by the southerly Southern Ocean swell and in parts of northern Australia by southeast trade-wind waves and northward flowing tidal currents (Short and Woodroffe 2009). Figure 1 illustrates the major sediment transport systems. 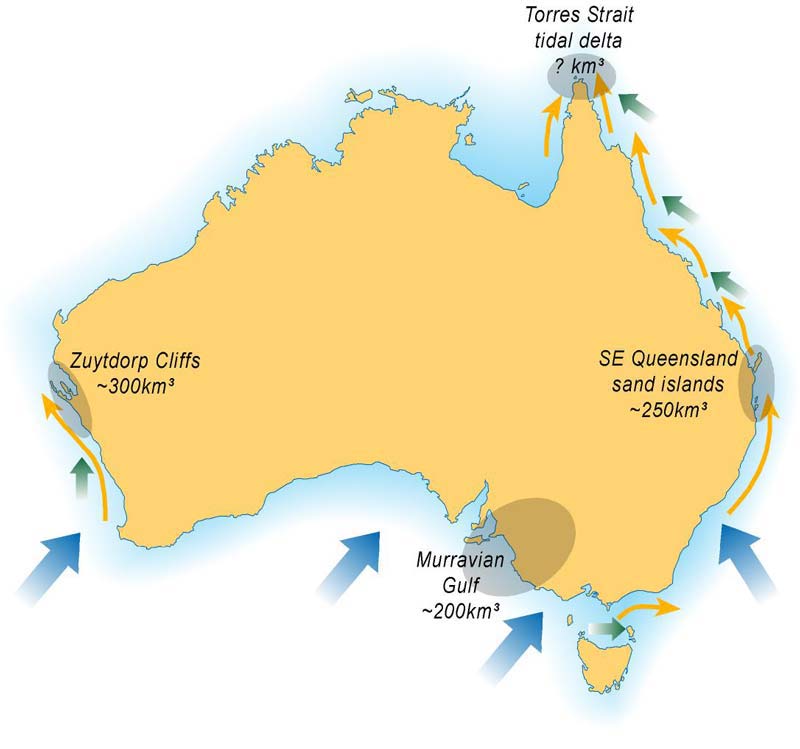 Failure to consider sediment transport processes across regional scales can be costly; it can result in permanent change to beaches and soft shores. The construction of a training wall in the early 1960s at the mouth of the Tweed River in northern NSW blocked the northward movement of sand over the state border and into the Gold Coast. This sand would normally have maintained the beaches in the region. The solution, including a seawall, dredging of sand and a permanent pumping system, has been a large and ongoing expense (see a case study on the Tweed River sand bypass).

Similarly, the northern drift of sand from Busselton to Mandurah on the Western Australia coast was interrupted in the 1990s for a canal estate development called Port Geographe. This resulted in erosion to the northern beach that threatened roads and houses and a build-up of sand and rotting seagrass against the updrift training wall.

Sand deposition areas can also present problems for coastal management, for example accumulating and shifting sandbars in tidal channels and estuaries can become dangerous for navigation. One place experiencing this is Georges Bay in eastern Tasmania, which is a sand sink and also an important sheltered port; the shifting and expanding sand bars in the tidal channel are a navigation hazard.

A coastal compartment is an area in which coastal processes, and their effects on the geology of the coast, are broadly homogeneous. The compartment boundary is usually a feature such as a headland or river mouth which effectively divides the compartment and its processes from its neighbour.

The coastal compartments approach provides a useful framework for coastal management and regional planning, as the compartments are derived from the assessment of the spatial areas of linked coastal processes and landforms. The compartment boundaries act as natural barriers to sediment transport, enabling the area between boundaries to be treated as a semi-closed system with quantifiable sediment sources and sinks. The approach is applicable to the open coast and does not include detailed sedimentary processes in estuaries and coastal lakes.

The coastal compartments approach is being used in the United States, the United Kingdom and some parts of Europe, as it provides an effective framework to address issues such as sediment movement between rivers and the shoreline that can cross administrative boundaries.

CoastAdapt includes maps of primary and secondary coastal compartments and their attributes, together with further information on their use: see the Coastal Compartment datasets, and the Information Manual 8: Coastal Sediments.

An important development in CoastAdapt is the provision of a susceptibility rank. The rank is numbered from 1 to 5 as follows, and indicates the likelihood and nature of coastal change in each secondary compartment:

Your local government may have available more detailed coastal information related to your location that you may also wish to consider.

How to use coastal compartments information in coastal management and adaptation

The following steps can help to make use of coastal compartments information in coastal management and adaptation.

Other sources of information will also be required for effective coastal planning and management, particularly where the compartment sensitivity rating is high and some Local Government may have available more detailed coastal information related. For example, there needs to be understanding of the local sources and behaviour of sediments to design effective coastal protection measures. In sediment deficient compartments, such as around Old Bar in New South Wales, there are limited sources of sand that can replenish eroding beaches without other consequences. This is in contrast to the neighbouring Foster-Tuncurry secondary compartment which is rich in sediment.