Planning for vulnerability at a regional scale

The climate is changing on a global scale, with some of our communities already experiencing extreme and intense events more regularly. To better plan for the future, we need to understand what is happening at the local scale, assess our vulnerabilities, and start managing our risks.

In line with global projections, it is anticipated that South Australia will experience a number of changes including: continued increases in average temperatures across all seasons, a harsher fire weather climate, more hot days and time spent in drought, a decrease in annual rainfall but an increase in the intensity of extreme rainfall events, and continued sea-level rise.

‘Many of our local governments have collaborated to identify their regions’ vulnerabilities and build resilience to the likely impacts of climate change,’ says Julia Grant, Executive Director for Water and Climate Change in the South Australian Department of Environment, Water and Natural Resources. ‘Some of our regions have signed Sector Agreements under the Climate Change and Greenhouse Emissions Reduction Act 2007, which demonstrates the shared commitment between our State and local governments to work together on adaptation.’

South Australian regions have conducted vulnerability assessments to support the development of regional adaptation plans, which aim to build resilience to the impacts of climate change.

‘As South Australia covers a vast amount of territory, our regions have had different outcomes in their assessments and plans,’ says Ms Grant.

Several of the regional action plans have used adaptation pathways to help assess the varying adaptation outcomes based on what interventions are used, and when.

‘The idea behind pathways is to understand the different types of decisions that need to be made, the lifetimes and flexibility of those decisions, and the need to address short-term issues while strategically creating options for the long-term future,’ she says.

‘As part of its work on SA Climate Ready, the Goyder Institute has developed, for the first time, projections to 2090 for each individual weather station across South Australia’s natural resources management regions,’ says Ms Grant. More information is available at The Goyder Institute.

As well as adaptation planning, the Government of South Australia is committed to action on mitigation. ‘To ensure that the State is fully prepared to make the transition to a low carbon economy, and to demonstrate leadership by example, the Government has introduced a target to achieve net zero emissions by 2050,’ says Julia. She says a suite of ambitious targets includes Adelaide becoming the world’s first carbon neutral city, attracting $10 billion in low carbon investment by 2025, generating 50 per cent of its electricity from renewable sources by 2025, and improving the energy efficiency of government buildings by 30 per cent of 2001 levels by 2020.

How is global information brought to local level in your region?
Are your different scales of governance interacting effectively? 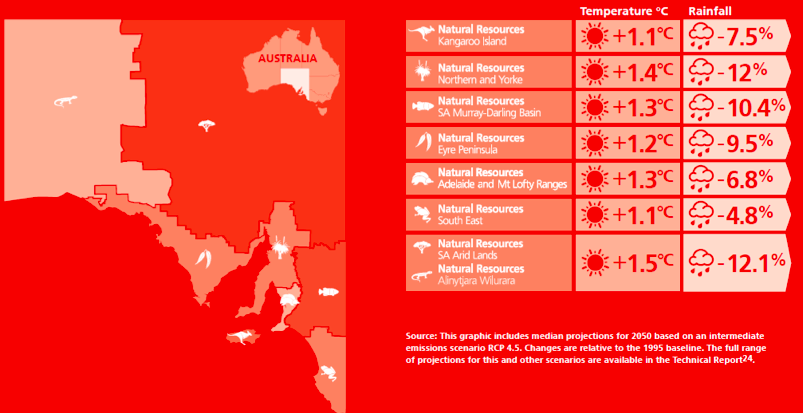