It’s one thing to read about coastal erosion in the Northern Territory, but it’s more gripping to see the way that the ocean’s energy is carving away coastal waterfronts. If you can’t do this in person, watching a professionally produced video is the next best thing.

Pam Robinson, former environment and climate change strategic planner at the City of Palmerston, says she set out to demonstrate to others what is happening in the Darwin region and actions being undertaken by local government.

Managing coastal risks and understanding what needs to be done about sea surge is the theme of her YouTube video.

‘Already with sea-level rise, salt water intrusion into freshwater has happened and in the wetlands areas we are losing many of the paperbarks,’ Pam says.

‘Sea-level rise is happening already – 18 cm in the past 20 years in the Darwin region, which makes it one of the highest rates anywhere. Primarily, this is due to thermal expansion of the Timor Sea.’

Pam led development of the City of Palmerston Sustainability Strategy, 2013-2018, and the City of Darwin Climate Action Plan, 2011-2020. Both documents can be found on the relevant Council websites.

‘The City of Palmerston will become the largest regional centre in the Northern Territory. The strategies examine what the councils need to do internally, and with the local community.’

The strategies include plans to implement climate change adaptation measures and reduce the Councils’ greenhouse gas emissions. A priority is to provide increased opportunities for community awareness and engagement on current environmental issues, such as ways to reduce consumption of energy and water.

In recent years, the Local Government Association of the Northern Territory has worked with Councils to undertake climate change risk assessments for their municipality or shire.

Pam Robinson is a member of the NCCARF end-users committee and a recipient of the Medal of the Order of Australia for Service to local government and to conservation.

How is sea-level rise threatening your organisation?
What evidence, if any, do you have of local coastal erosion? 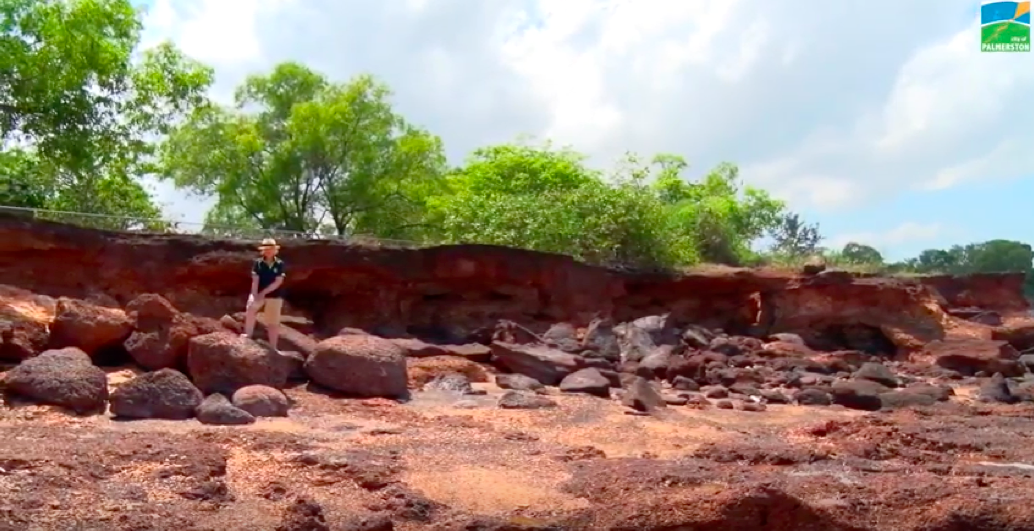 A still from the City of Palmerston climate change video. https://www.youtube.com/watch?v=SV4UN6NUC7Q&feature=youtu.be
30 June 2017
Save

Coastal climate impacts and responses in the Darwin Region