Home > Resource centre > How to pages > Applying a pathways approach

To demonstrate how a pathways approach may be used in adaptation decision-making, we present a hypothetical worked example about coastal protection.

The adaptation challenge: The hypothetical coastal local government at Sandcastle Bay is considering how it will adapt to rising sea levels and the risk of inundation to its small tourist and fishing community of Sandome (Figure 1). 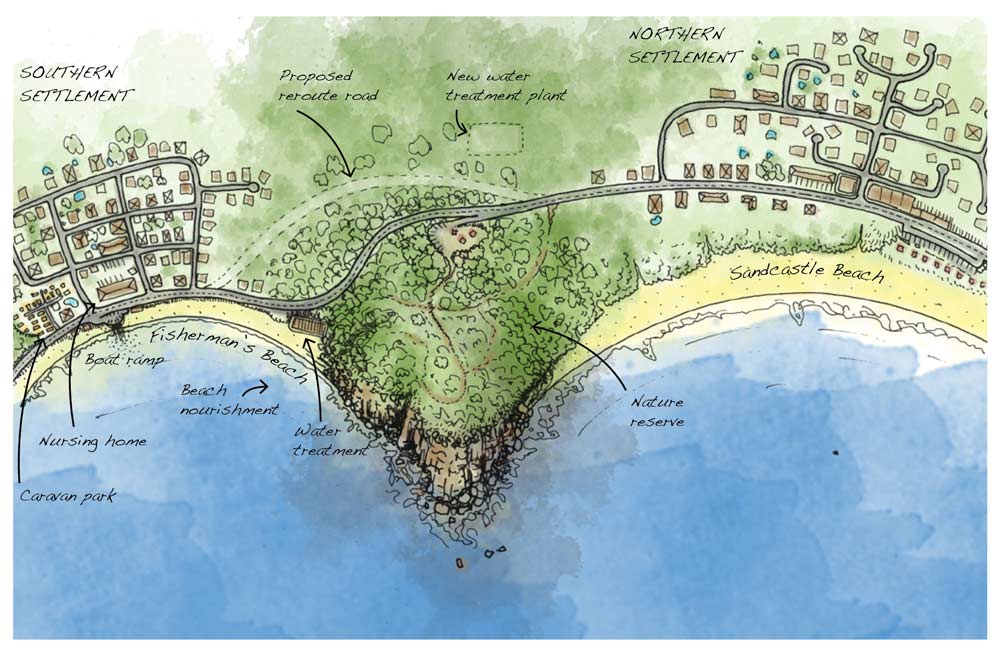 The location:  Sandome is settled in two halves, with a range of older housing in the original fishing settlement to the south of the headland and a newer vibrant township on the northern side. Sandome is a popular family holiday destination due to its white sand beaches and there is a large retiree population, a strong fishing industry and a nature reserve on the headland that attracts weekend visitors.

Current conditions: Sandome is experiencing a growing problem of beach erosion in the original fishing settlement.  Beach erosion has always been an issue, but older local residents are clear that the situation has worsened in recent years. During the last major storm the main road into the southern settlement was severely damaged, resulting in restricted traffic between the northern and southern settlements. Once or twice a year there is flooding in the southern settlement that affects several houses, a nursing home and the water treatment facility.

To address present and future risks, the council has proposed a moratorium on all future development. The proposed controls are very unpopular with local homeowners. As part of a broader adaptation planning exercise, the council is undertaking consultation with the community to map out and explore potential ways forward, based around a pathways approach (see section 8 of Information Manual: Costs and benefits and Pathways approach for more details on the pathways approach).

Community engagement and consultation:  Sandcastle Bay Council have begun engaging with the Sandome community to consider future options for their settlement. The council hopes to identify and build acceptance for future options that will protect the settlement and avoid costly repairs to the water treatment facility.

After initial one-on-one discussions with key community members and meetings with community groups, a workshop with the wider community was organised. The goal was to bring together residents and the council to identify and explore the development and conservation priorities of the community for the future. The discussions were informed by local studies, including inundation modelling (to identify areas at high risk from sea-level rise) and geological surveys, and scientific information (future climate scenarios). The sea-level rise scenarios ranged from 0.6 m (for a lower greenhouse gas future) (see Infographic: What are RCPs?) to 0.8 m (business-as-usual) towards the end of the century.

Residents identified the importance of staying within the Sandome community and accessing a jetty for fishing. It was also clear that the community valued the nature reserve both as a recreational space and for conserving local wildlife, and would not tolerate the loss of that area.

Table 1 summarises the outcomes from the workshop, in terms of the adaptation options identified and the community and council attitudes to each of these. The table attempts to map out the levels of protection that might be afforded by each option, as well as any associated potential negatives.

Major points that emerged from the workshop are:

Developing the adaptation pathway. Following the workshop, the council prepared a draft visualisation of the adaptation options. An adaptation pathway was plotted. The most likely first step along this pathway is to develop and implement a formal beach nourishment program. This may be followed by a staged reduction of development with longer-term plans for relocation of infrastructure, housing and the road as sea level increases. These proposals were tested through subsequent rounds of community engagement and modified to produce a preferred adaptation pathway (Figure 2). 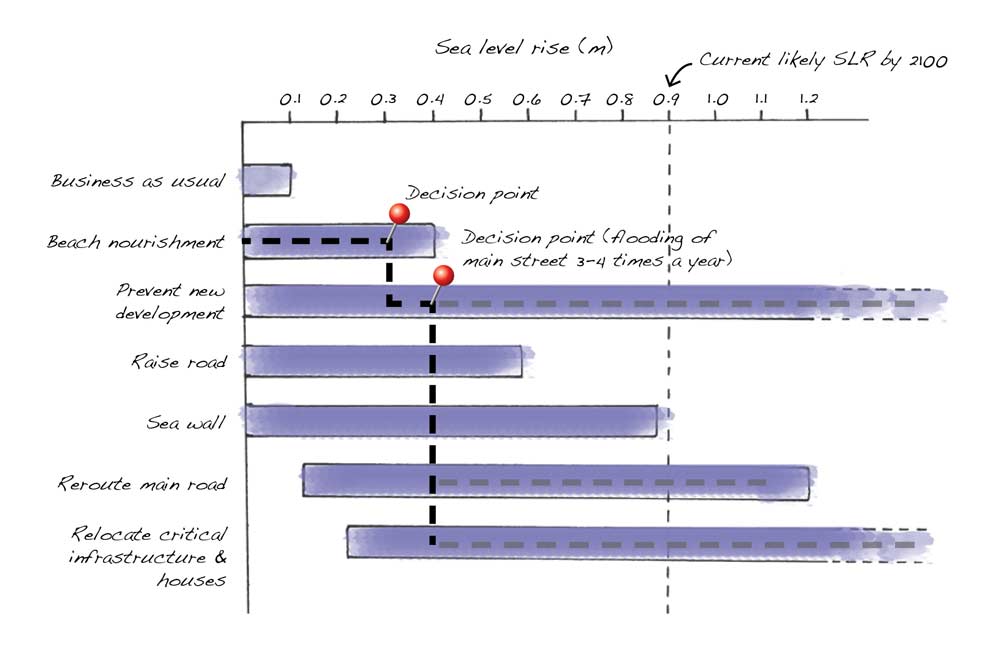 The next step for the council was to develop costings of the proposed options in order to test the suitability and feasibility of the preferred adaptation pathway. The council undertook a further round of consultation to present a finalised and costed pathway.

With general agreement on the preferred adaptation options, the Sandcastle Bay Council was able to build an adaptation plan that begins with a simple beach nourishment program. When sea level rises by about 30 cm, this will shift to new development controls that prevent new development in high-risk areas. The council will be able to start preparing for these changes now. As sea levels increase by approximately 40 cm, longer-term and financially significant options will need to be considered, including relocation of the water treatment plant, development of a new nursing home and rerouting of the main road. Identifying the triggers for adaptation action helped both the council and community to understand the significant challenge ahead but also to realise they have time to prepare for and undertake actions that will help reduce the community’s risk.

The council and community understood through the process that the pathways map will need to be regularly revisited and tested, as new scientific understanding of risks emerges and new technologies expand the range of adaptation options. As sea level continues to rise, thresholds in the pathways map will be crossed, and the actions identified in the map will need to be implemented.

Assessing the costs and benefits of coastal climate adaptation

The Eyre Peninsula: A case study of effective adaptation policy making and support

What is a pathways approach to adaptation?